Going Global 2019: Where to leave your train ticket at

1. Kuching to Kuala Lumpur: Long distance travel in Malaysia is complex, and its trains are nearly as eccentric. Service is limited in several areas, prices vary widely and often ticket-holders have to battle… 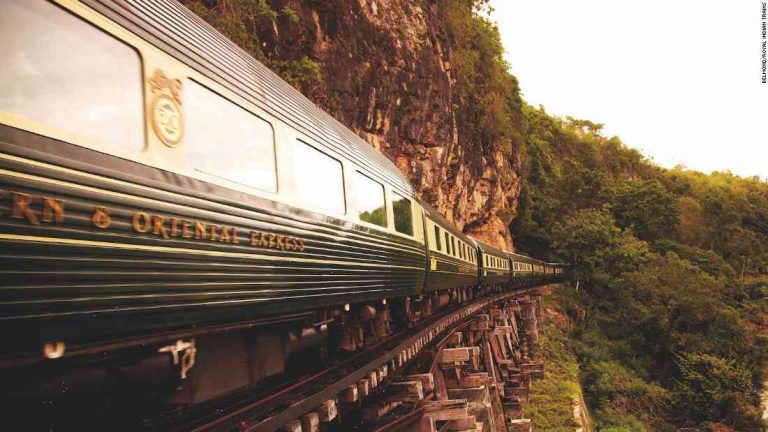 1. Kuching to Kuala Lumpur: Long distance travel in Malaysia is complex, and its trains are nearly as eccentric. Service is limited in several areas, prices vary widely and often ticket-holders have to battle long, three-hour lines.

After crossing Penang for several hours, we hopped on a train from Kuala Lumpur to Kuching, then a train from Kuching to Kuala Lumpur for about 15 minutes before being whisked across Penang by the sunset. Next up was Kuala Lumpur, up to 20 hours and one of my favorite cities on Earth. The scenery, which I could see while trapped in an insanely long line snaking up to our van and then around it to the front, included streets with their own lanes because of extensive road construction, tall buildings with tropical plants, lamp poles covering the rooftops and rock formations like the Great Pyramid of Giza.

The second part of our journey was a long trip through remote north Malaysia. Our cabin was on a train leaving Kuching. The lights weren’t on and the air conditioner didn’t work, but the train was bright and cool. (Praise the heavens.) It stopped in a few places for night stations and first-class areas, but nothing was night-dark. The scenes from Kuching were stunning.

2. Jakarta to Bandung, Indonesia: The main Asian country of that name in Indonesia stands for Indonesia and Bangka is the location, where the navy is based. Jakarta was about the second-largest city in Southeast Asia when I first visited it with a traveling companion in 2010.

I missed no opportunity to walk around the city, and the train followed my footsteps. The nature of the trip was great: If a train ran past, so did a banyan tree, and as far as I can tell there is no landscaping on the train. To my eyes, the train stopped for coffee and sandwiches, the driver’s garden scene, the back of a bus and the Muslims who pray on the tracks. There were markers at station platforms for religious holidays, which were celebrated even though the timing of the Indonesian New Year is a moveable feast.

Guests had a unique, interesting view of the Indonesian scenery, which ranged from meandering lines of hills that was fun to spot, to surfers riding waves. (Thank you, Vinayak Tambunan.) I liked the banyan tree, too, but the real treat was the trekking on the Bajarang Bulung National Park, deep into the jungle. It takes two to four hours of walking, which is definitely worth it. My guide, Noha Nihad, pointed out huts made of bamboo with a dirt floor and straw roofs. Those make a great place to sleep, and Noha, who is one of the sweetest people I have ever met, was able to show me different trails, like one where you had to climb a trail to reach the water.

The best part of this trip, though, was the people. I spent a few hours with a Malaysian woman and her daughter and saw how the family was interacting with their surroundings, learning everything from water conservation tips to how to treat food at home for the transmission of illness to speaking about the betterment of relationships. These are people who know their country very well, and their willingness to help people to improve it is phenomenal.

3. Bangkok to Phuket: The start of the Thai and European tourist season. Phuket is famous for its snorkeling, biking and diving.

Phuket’s train ride is the longest journey I’ve ever taken, but it was well worth it. Travelers can go to a cave that stretches 10 miles and go hiking in a national park and be back in time for dinner. It’s breathtaking to see. While the train runs at a snail’s pace, we had a lot of time to stop and listen to the sounds of the jungle and watch the sunset. I especially liked the gorgeous foliage, which we had no idea was so lush and beautiful.

4. Istanbul to Istanbul: As Istanbul’s opportunity to ride a train out of the city showed, public transit in this city is inadequate. If your luggage isn’t connected with the train at a station near the palace or museum where you were staying, you’ll be waiting days to get it. And to travel across the city by plane, a ticket is only $50 per person.

Istanbul, a city with so much to do, is so breathtaking that the best way to experience it is by rail. You can see some of the world’s best sights by train from West to East, East to West and back.

5. Kampala to London: I could have stayed in Kampala all

NASA’s UFO craft orbiting out of this world