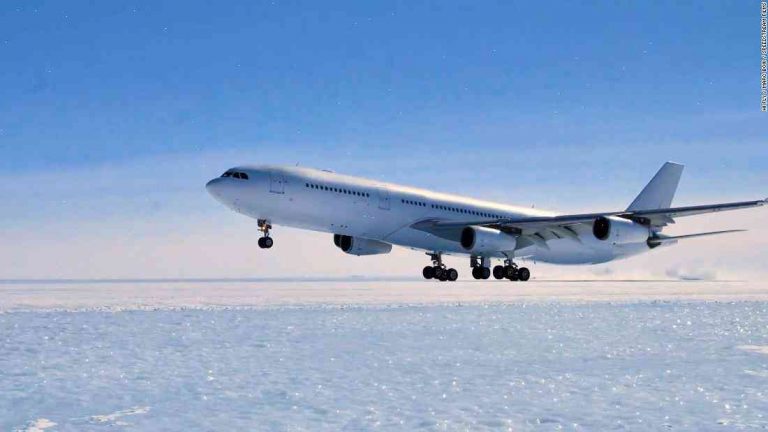 Airbus has flown an A340 over the Antarctic for the first time since 1929 to send a message of support to scientists on a mission there who are mapping the landscape and working to better understand the impact of climate change.

The A340 took off in the French port of Toulouse, south of Paris, and passed over the bottom of the ocean off Antarctica, with pilots limiting their time in the polar region to 24 hours.

The huge plane, which is not used for commercial passenger flights in Europe or North America, has an instrumented plane on board that will provide high-resolution measurements of the ice and water with an imaging radar system.

“They will help researchers better understand what the climate is doing in the rest of the world, in other parts of the world,” said Nigel Barnes, a marine geoscientist at Australia’s Commonwealth Scientific and Industrial Research Organisation (CSIRO).

“We’re looking at how the changes in Antarctica may affect the rest of the Earth.”

At the same time, if sea levels rise, what might be underwater on the Antarctica coast may become land.

Scientists with the CSIRO plan to use the aircraft to monitor the geology and microbial activity in the ocean floor and on the undersea ice shelf of the West Antarctic Ice Sheet to measure how fast it is melting.

“We can predict quite quickly how many icebergs might float out and where they’ll go, how fast they will drift and maybe where they might hit land,” Barnes said.

The field trip for more than 50 scientists and support staff will take place later this month.