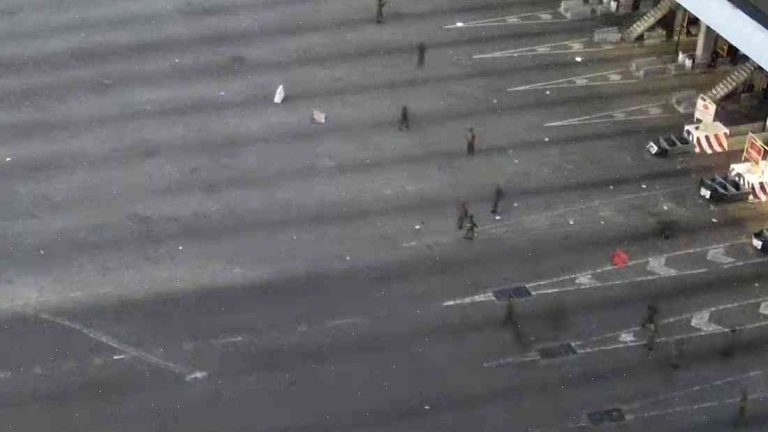 The surveillance footage released Monday of late night police shooting of a robbery suspect at a toll booth in a catchment area of Lekki Agiary has raised some troubling questions about the security of that zone, as well as the effectiveness of the toll gates.

On Aug. 20, police fatally shot a man who is suspected of stealing credit cards at Lekki toll gate. The suspect, Jay Etuk, was killed when he allegedly began waving a gun out of the window of his car on a bridge leading from the toll booth to Ogunme Phase 2.

According to the suspect’s Facebook page, which was used by a Lagos radio station to identify Etuk as the suspect, he is originally from Delta state. He reportedly lived in Lagos and had a job in a warehouse.

He was the only suspect arrested in the Lekki Tollgate incident. Other officers were on the scene at the time.

A family member has revealed to the Lagos State Police Commissioner that her late brother “did not have anything with him at all,” Daily Trust reported.

Eyewitnesses told Daily Trust they did not see an gun at the scene of the shooting.

“My heart is heavy. The entire family of the deceased doesn’t know what to do,” the relative said.

A representative of the station, Biola Kajiji, quoted on a Radio Netherlands Worldwide interview with Etuk’s sister, Zeke, claimed police surveillance camera saw the suspect with his hands in the air, preventing any threat to the life of an officer.

Kajiji also stated that at the time of the shooting, only one of two officers stood behind his vehicle for safety.

The license plate number of the suspect’s car was identified as having been used in another robbery in 2017.

The incident prompted many to express their fears that the road tolls present risk to citizens using the gate.

But while the police have clarified that his gun was recovered, there is no official confirmation of whether he had a gun with him on that night.

Police Commissioner Imohimi Edgal is facing heavy criticism over his apparent lack of understanding of the complex problem of its tolls, and his over-reliance on crowd control methods to resolve disputes.