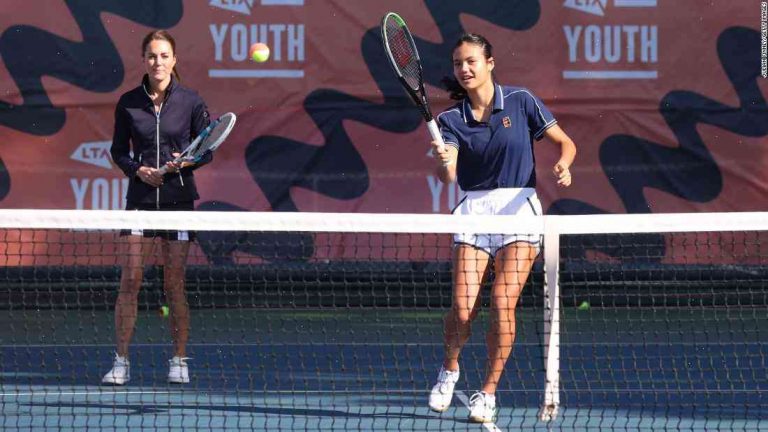 Great Britain’s Emma Raducanu celebrated the return of the Olympic Games with an appearance on Wimbledon’s Centre Court alongside Prince William.

The London 2012 bronze medallist play in a Strictly Come Dancing-style competition, in which she matched best foot forward a few metres from a court bathed in lights behind the Duchess of Cambridge.

The 19-year-old – who was born in Slough and moved to Barcelona aged nine – told BBC Radio Berkshire: “I’d like to think I was doing quite well against Prince William, but I think he’s using a different tennis shoe so we’ll see, I’m not going to know for sure!”

Not only did Raducanu wear a dressing gown on her sofa in her dressing room on the eve of her match, she wore a similar item of clothing – which she admitted was quite a sight for the world of professional tennis – as she hid from the television cameras on court.

Raducanu, who is ranked 70th in the world and has never won a WTA title, admits her dream is to win the Grand Slams, but must wait until 2018 for the chance.

However, she says the prospect of playing at Wimbledon again will not daunt her – especially as she has a Wimbledon trophy of her own.

“I’m here now, and the next Wimbledon I hope I’ll have the chance to compete,” she said.

“I didn’t even know that my favourite players are Wimbledon legends – I just read the website! I get nervous before matches, I don’t think I can practise as well as I do now, but I just wait for it, see it, put it into practice in my head.

“When I came to my first Wimbledon last year I just stood on Centre Court, I was so nervous, but I made it through – so to come back this year and know I have a chance of winning a medal is quite special.”

Canada changes rules to speed up asylum-seekers at US border